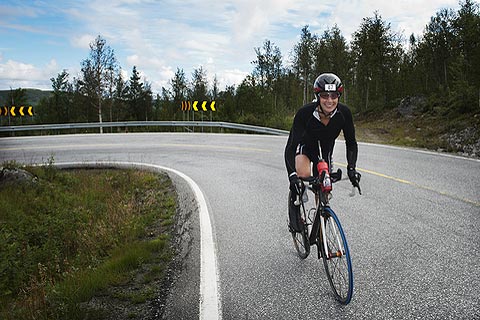 Cycling up hills (or mountains) is the hardest part of cycling when you are just starting out. Ignoring problems of speed, most new cyclists can manage to go along a flat road for a reasonable distance without any terrible difficulties.

But what happens when a hill turns up? Even a  small  hill can be a big challenge if you don't know what to expect and haven't prepared.

To put the record straight first - hills never get 'easy'. They get easier with experience, but then you go faster. However casual that cyclist might look as he races past you on the hill, be assured that he is also suffering. Suffering faster, it is true, but suffering all the same. Hills hurt - those little slopes you call hills when you start out you may not even notice a couple of years later, but there are always longer, steeper hills somewhere else!

Hills for me are still the greatest pleasure of cycling. They are the best time to really push yourself to the limit, and the pleasure (and sense of achievement) of going 'fast' up a hill that you know you would barely have got up at all a couple of years earlier is very real.

Once you have recognised that hills are and always will be difficult, how should you approach them?

Find a positive attitude and a hill. Ideally your cycling practice will start with a hill 2-3 kilometres long and rising about 30-50m per kilometre, but we all have to take what is near us.

Choose a nice relaxing gear, at which you can pedal up your hill at 65-80 rpm, keeping a consistent speed, and try to go up steadily. This is important! You are trying to carry on 'pedalling quite fast' in an easy gear, not pedal slowly and strain your legs. With a little practice you will come to know your own capabilities and what level of effort you can sustain, and you will find a speed at which you can cycle up most hills moderately painlessly, but first you need to develop that capability.

At first, you don't need to worry about racing up the hills, just focus on maintaining a constant speed. You should be able to speak if necessary, but singing should be beyond you. Depending on your fitness even a small hill can be very difficult at first.

Remember: it is better to start out too gently and have some energy left for a last minute surge than to start cycling up the hill too fast and then completely run out of steam half way up. Over-exertion for the first part of a climb is very common, especially when you are unfamiliar with the hill.

Try not to look at the top of the hill until it is quite close. I always stare at the road immediately ahead, or the side of the road, or an intermediate point on the road. The goal is to avoid panicking about the hill, but to just take it one section after another. For the time being try and do all this while remaining seated on the saddle.

Focus on breathing out regularly. Don't worry about breathing in, that will happen naturally when you breathe out!

Most hills have several sections, try and think about finishing the section you are on, rather than worrying about the whole hill.

If you can look down, and concentrate on your breathing and the rhythm of your pedalling, the hill will pass in no time.

Initially the goal is simply to reach the top - nothing is more demotivating than failing to reach the end of the hill, so first worry about finishing the hill, then later about improving speed.

The next step is to slowly improve your cycling speed. After a few weeks of the above, you will find that hills are becoming slightly easier, that your speed (and more importantly your confidence) improves, and you can use slightly harder gears. Now would be the time to start setting goals. Find a hill that you are familiar with, and two or three times a week do the same hill, noting which gear you are in and what average speed you can do. Try and do it a little faster by using a harder gear, but maintianing the same cadence (pedalling speed).

Sooner or later you will reach the point where your willpower and new found abilities takes over, and you WANT to go and beat that hill. You will know what speed you can keep going at, and be able to judge for yourself if you can go faster. The hill is no longer a scary place, it's where you want to be!

At this point you can think about interval training on the hill. More or less, this means cycling up the hill for perhaps 10 minutes, then going back down gently and doing it again. Perhaps three times. This stretches your legs to the limit, because just as they finish recovering from one exertion along comes the next.

A more sophisticated version of interval training is also possible. Choose a part of the hill about, say, 300 metres long, and from start to end of that section work very hard. Only as hard as you can maintain for the distance, but hard all the way. Then cruise along for five minutes at an easy pace (or go back down the hill), pedalling gently but continuously as you recover. Now do the same again, climbing the same hill (or sections of the hill) three or four times.

The goal here is to use 'anaerobic energy' - which requires great effort but is very efficient at building short term strength and stamina.

Repeat the process about five times. In no time at all you will be that person roaring past the other cyclists...or at least keeping up.

Sometimes it is necessary to stand up (cycling, not pushing!) for the steepest parts of a hill, but this uses more energy and raises your heartrate, so it should be saved for occasional use only. Having said that, when I restarted cycling after several years away from the sport, I found I couldn't cycle more than about 50 metres up-hill standing-up. If this is the case, you should practice this skill also.

Probably your hill has one or two shorter, steeper parts. If you change to standing position for those sections, it uses different muscles and gives the others a brief moment of welcome rest. But ultimately, standing-up is more demanding than sitting down.

Pull up on the handlebars as you push down with your pedal. After a few tiles, try and use a harder gear. Soon you will be able to burst up short sharp sections of hill on your bike.

Standing-up cycling is also commonly used for short-sharp hills, especially when you can maintain the gear you are already using. Instead of changing to an easier gear for the short climb, stand-up and keep using the same gear.

Keep pedalling until you are over the top of the hill. Many cylists stop the effort a few metres before the top, and 'cruise' over the brow. You lose valuable seconds doing this, and also lose important speed for the following section.

With regular practice, the shallower hills that you once struggled up will start to seem like flat sections of road, and big hills will get much easier.  If you really have no hills at all near you, there is one way that you can still practice. Wait for a windy day, and go and cycle straight into the wind. Almost as much fun as a mountain.