I have to explain three things before starting this Trek Madone review:

1) The bike under review is one I bought myself, with my own hard-earned cash, and I ride it a lot. It is not a short-term review model - unfortunately Trek didn't feel the need to send me a free bike, I can't imagine why!

2) Because buying bikes myself is rather expensive (!) I don't have a great range of comparisons to make with similarly priced bikes.

3) I am mid-40's year old. My own experiences might be different to those of a younger, stronger 25 year old. I ride essentially for pleasure rather than spending much time doing extensive training, but I do work quite hard.

In my favour I have a job that enables me to cycle pretty much every day, and I live in the south of France so it is possible to go out cycling for a large part of the year.

Take the review as it is - a review of the Trek Madone 5.5 by an enthusiastic rider - but remember I haven't ridden many bikes in the same price range - and all will be well...

Being all carbon the Madone is significantly lighter than my previous bike. It is also much more rigid. I had thought this would make the ride quicker and easier in all conditions, but it's not quite as simple as that. The bike loves going fast - and somehow feels fast even when it isn't moving fast - but really does take quite an effort to get it zipping along. 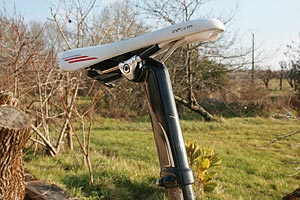 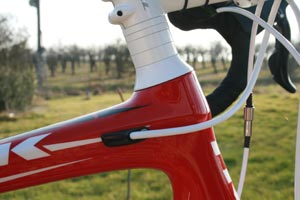 If I go out for a ride feeling a bit tired or lacking in energy, I find it isn't a great bike for just ambling along gently - it seems to need to be pushed hard if you want to do well. But when you are feeling full of energy it can storm along very fast and is a very great experience. On balance probably all a good thing because it pushes me to always do my best!

Downhill: I've never been a particularly fast descender but I do find I can go that bit faster on the Trek Madone before it starts to get scary.

On the flat: probably less impact here than in any other area of performance.

Uphill: the steeper the hill, the happier the bike seems to be. On all hills it seems happy. On steep hills where I need that extra bit of speed it is always ready to oblige (legs permitting) and a short fast burst standing up is much more fun and easier than I could hope for.

Overall, when you make the effort it leaps forwards with great speed and you think you're Contador on a good day, especially (for me at least) on the hills, where the Madone 5.5 really seems to come into its own, above all when the goung gets tough on a longer or steeper climb. 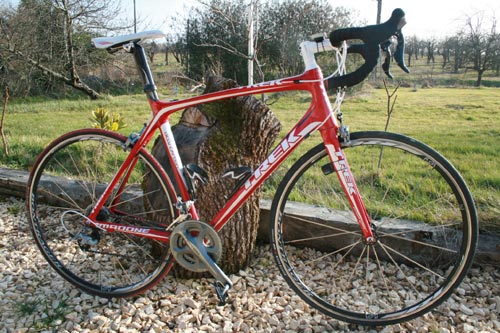 The photos show a couple of the more unusual features of the bike. The seatpost is quite unconventional (although the style is more common nowadays) and is a sleeve that slides down across the 'seatmast' of the frame - seems very quick and easy to use. The second picture shows the cabling on the bike disappearing into the frame, keeping things nice and tidy.

Ordering and buying the Trek Madone

You can specify the bike you want on the Trek site - seeing how much different wheels, handlebars etc will affect the price or selecting a nice colour scheme (both standard or very individual finishes are available). Trek insists that you go into a shop at this stage, so that your requirements can be met exactly. This which includes making sure the handlebars, cranks etc are the right size for you and so on.

All a fine idea that my own store knew nothing about and didn't do any of. I can only assume they guessed what sizes I wanted or needed (they did measure me to check the frame size was right). It is unfortunate if Trek make such an effort themselves but then fail to review the shops that are involved in the sales process to ensure they also understand the requirements.

In fact the shop where I ordered the bike made very significant mistakes about the whole ordering process which then took about 10 weeks rather than the four weeks promised on the Trek site, and I had several 'issues' in gaining a response to my enquiries from both the shop and from Trek themselves. To their credit, they threw in a free pair of Look Keo carbon pedals with the bike as a form of compensation.

Model / Specification of the Trek Madone 5.5 under review

The troubles I had in actually buying the bike made me very close to cancelling the order, and I was very disappointed by the poor customer service I received. Happily as soon as I had the bike in my hands all these troubles were forgotten because of the pleasure of riding it - and even now in the middle of winter I look forward to going out for a ride most days, because of the great enjoyment I get from cycling on almost all routes and types of terrain.