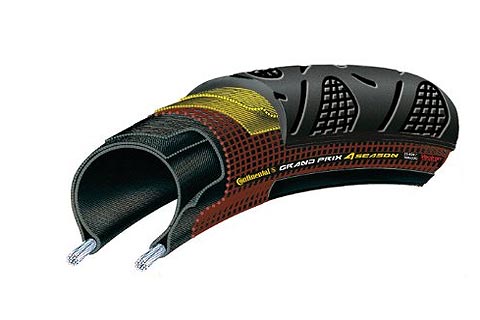 During the winter months it is sometimes a bit scary going down a descent on a wet road using regular road bike tyres, so I thought I would take the opportunity of a gift voucher to buy and test the Continental 4-Season Grand-Prix bike tyres.

As their name suggests they are intended for use in all weather conditions and as luck would have it (!!) the roads have been suitably wet and slippery for the last few weeks.

I am also intrigued by frequent references to the advantages and disadvantages of using 25mm tyres instead of standard 23 mm tyres, so I bought the wider model*. Of course, this does mean that in the review below I can't tell what changes are due to the change in diameter rather than the change in tyres...

* Discussions about the merits of 25m vs 23mm are never quite settled on which is better. Common sense suggests that the narrower tyres will have less area touching the road and therefore less resistance. Unfortunately mathematicians tell us that common sense is not reliable, and due to differences in wall height, different degrees  of compression, and the fact that wider tyres are operated at lower pressure it is not easy to directly compare the two. All we can do is cycle with both and see what we think!

The tyres replaced my Michelin Pro Race tyres which are an excellent tyre, and one I would happily use again, but mine were rather worn and developing cracks around the edges so I felt justified in spending the £80 for two new tyres. The Continental tyres weigh in at 240 grammes each (230 grammes for the 23 mm version)  compared with the 200 grammes for the Michelin tyres. So an extra 80 grammes, which isn't a huge amount but is not completely irrelevant - a significant amount of the effort of cycling is getting the wheels to change speed quickly so extra weight here is more noticable than if you carry an extra 80 ml of water.

Straight out of the box the Continentals look like more grippy tyres, with a significant tread pattern rather than the smooth tyres we are used to. I did read that this tread pattern was added for psychological reasons - that is, so we think they grip better - rather than because of the actual grip benefits it provides.

Fitting them was very straightforward and easy to do - I used a single tyre lever for the last few inches because I don't like hurting my thumbs, but I'm pretty certain I could have popped them on by hand if necessary.

I inflated them, as recommended, to about 95 psi compared with about 110 psi for the previous tyres.

Anyone who has ridden a mountain bike as well as a road bike will know that the experience is completely different, with a mountain bike feeling secure on the road in all but the most extreme conditions. The Continental tyres brought a significant degree of that advantage to riding a road bike in the wet, even on flat roads and not just when descending.

They did feel slightly heavier however (again, could be psychological?) and I suspect that in dry conditions, especially when trying to power away up a hill, they would cause overall speed to drop slightly. But this is winter and I don't try for all out speed so much as just to maintain fitness levels until the better weather arrives, and my speeds tend to be less as a result anyway.

On wet or poor condition roads, your speed should be slightly higher due to the extra confidence that the bike won't slip away from under you. Going over holes and loose roads was also substantially less painful and than with 'regular' tyres.

I have only cycled about 200 miles with the tyres so far, so can't yet comment on how long they will last, although others tell me that they typically last at least 3000 - 5000 miles, with punctures a scarcity due to the extra wall strength that is incorporated. Continental tell us that this is due to "a DuraSkin sidewall reinforcement and two-layer Vectran breaker". Do companies make these things up just to impress us? No idea what Duraskin or Vectran mean but they sound good, and presumably acount for the extra 40 grammes.

Certainly as a winter tyre I love the Continental GP 4-Seasons, and feel newly motivated to get out on the cold wet roads! A combination of the lower pressure, wider tyres and extra grip makes them ideal when road conditions are less than perfect, and will almost certainly make them more comfortable all year round, even if it is slightly at the expense of absolute speed.

Since they were expensive I will probably keep them on until well into spring, then put the old tyres back on for a couple of rides and see if they seem significantly faster and lighter. At the moment though, I suspect I will end up keeping them on all year round rather than changing tyres frequently.

My only complaint? My Michelins had a red sidewall, and the Continentals, although there is a red tinge to the edges, are essentially black. Since my bike is red I do like to have matching tyres!